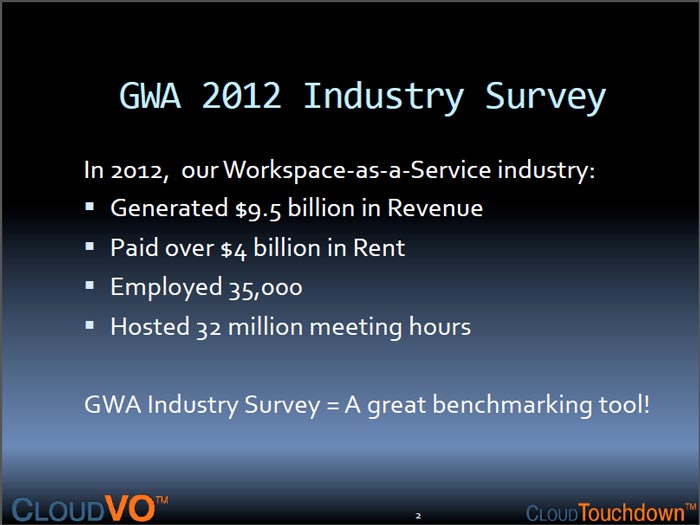 The Global Workspace Association (GWA) Conference in Atlanta on September 19, 2013, Scott Chambers, GWA Board member and President-elect, and Laurent Dhollande, CloudVO ™ CEO, presented interesting estimates for the size of the Workspace-as-a-Service ™ Industry.

The data was extrapolated from:

The end result was presented by Scott as the GWA estimate of an industry that:

Laurent further extrapolated that this means approximately 1 million clients/members, which he pointed out is only 0.01% of humanity or 0.1% of the industry full potential, if one uses IDC’s estimate of 1.3 billion mobile workers worldwide. He broke the number down between 84% Office Business Center clients and 16% Coworking Members. In a follow up interview by the CloudVO ™ Inquirer, Scott estimated that the Workspace-as-a-Service ™ industry as a whole is probably growing at a rate north of 15%, with the coworking segment of the industry growing the fastest.